All four instruments above are signed by H.M. Queen Elizabeth the Second.

Memorandum of Understanding between UNESCO and the United Nations Volunteers Programme

This agreement is intended to modify the legal status of the Office for Climate Education, according to UNESCO's aim for Sustainable Development for Education.

Grant Agreement between UNESCO and the Austrian Development Agency (ADA)

Contribution to the project "A Community-focused Flood Early Warning System for the BuPuSa Transboundary River Basins." Includes five annexes including a project document.

This amendment is intended to provide additional funding to reinforce UNESCO's responses to the COVID 19 pandemic in the area of freedom of expression and artistic freedom.

Programme Cooperation Agreement between the Norwegian Agency for Development Cooperation (Norad) and UNESCO, regarding financial support to results areas in UNESCO's Programme and Budget (40 C/5) (Norad's ref. no 20000338)

Agreement between UNESCO and the Organization of Ibero-American States for Education, Science and Culture

Memorandum of Understanding between UNESCO and the Organization of Ibero-American States for Education, Science and Culture (OEI)

This Memorandum set forth the modalities of cooperation within the framework of the 1990 agreement signed by the Parties, after a first agreement signed in 1957. It contains two originals in English and in Spanish.

Includes two original copies in English and Azerbaijani. A concept note about UNESCO's educational response to COVID-19 is mentioned as Annex to the Agreement, but absent.

The agreement takes place within a Framework Agreement (2014) and is intended to support UNESCO's project "Strengthening Sciences, Technology and Innovation (STI) Systems in Africa." The project outline document, including a Result Assessment Framework, a budget and a workplan, are annexed.

This agreement takes place in line with a Memorandum of Understanding signed on 2019 to strengthen the cooperation of the Parties in the field of culture and cultural Heritage, and with the National Cultural Strategy launched in 2019 for the Kingdom of Saudi Arabia. It contains two annexes, including a programme outline for "Culture and Digital Technologies: an opportunity for sustainable development." in both Arabic and English).

Subsubseries contains FIT agreements for the Sultanate of Oman as a recipient country.

Funds-in-Trust project agreement with the Government of the Sultanate of Oman, for the project "Supporting Capacity-building for nomination projects and promotion of World Heritage Sites in East Africa"

The Project document, including the budget, is attached as annex.

Subsubseries consists of agreements for Italy as a donor country.

Funds-in-Trust agreement between UNESCO and the Ministry of the Environment and Land and Sea Protection of the Italian Republic, to support the "UNESCO international environmental experts network" Programme.

This agreement takes place within the Multi-Partner Trust Fund in support of "UNESCO international environmental experts network" Programme (2020-2023). The Programme Outline is mentioned as annex but absent ; a schedule of payments is attached as annex.

Memorandum of Agreement between the European Organization for Nuclear Research (CERN) and the UNESCO.

Copy, not original of memorandum.

This memorandum was foreseen by the Agreement of 31 May 1956 between CERN and UNESCO, intended to promote their collaboration in the filed of nuclear research.

This Memorandum of Understanding is entered into pursuant to the "1949 Agreement" establishing a framework for cooperation and consultation between the Parties.

Protocol on Amendment to the "Framework agreement between UNESCO and the Government of the Republic of Azerbaijan for cooperation in the areas of education, sciences, culture and communication" signed on 18 July 2013

Funds-in-Trust - Denmark : Model Funds-in-Trust project agreement between UNESCO and the Kingdom of Denmark for the project "Enhancing the Safety of Journalists in Africa and the Arab Region"

This Funds-in-Trust agreement is signed with UNESCO by the Permanent Delegation of the kingdom of Denmark to UNESCO and the Ministry of Foreign Affairs of Denmark. It contains three annexes, including a Project Document.

A presentation standard document of the International Programme for the Development of Communication (IPDC), is attached as annex, subtitled "strengthening the contribution of media for a future of sustainable development".

The agreement contents the CapED Programme Document (revised in June 2020), including a CapED results matrix, attached as annex.

Memorandum of Understanding between UNESCO and the Government of the Republic of Honduras, during the visit of the General Director of UNESCO in Honduras

This understanding, signed on the occasion of the official visit of the general director of UNESCO in Honduras from 18 to 20 April 1999, is intended to strengthen their cooperation. It sets out the list of UNESCO's projects and activities in Honduras, including a contribution to support the transformation of the National Education of Honduras.

Arrangement (based on a general arrangement) between the Minister of Foreign Affairs of the Netherlands and UNESCO, for supporting the Li Beirut Initiative.

This arrangement takes place in line with the General Arrangement concluded on 18 Maarch 1994 between the Parties and with an Amendment on 25 February 2008. The Netherlands' financial contribution is intended to support the Li Beirut Initiative, in particular the project entitled "Supporting Access to Reliable Information during Elections in Lebanon". Among the three annexes, is attached a presentation document of this project.

Arrangements (based on a general arrangement) between the Minister of Foreign Affairs of the Netherlands and UNESCO, for supporting UNESCO's International Programme for the Development of Communication (IPDC)

This file contents two arrangements, concerning two contributions from the Netherlands for the UNESCO's IPDC Programme. These arrangements take place in line with the General Arrangement concluded on 18 Maarch 1994 between the Parties and with an Amendment on 25 February 2008. Each arrangement includes three annexes.

Arrangement (based on a general arrangement) between the Minister of Foreign Affairs of the Netherlands and UNESCO, to support the Multi-Donor Programme on Freedom of Expression and Safety of Journalists.

This arrangement takes place in line with the General Arrangement concluded on 18 Maarch 1994 between the Parties and with an Amendment on 25 February 2008. Its contents seven annexes, including a presentation document of this Multi Donor Programme's Strategy.

Memorandum of Understanding between UNESCO and the Generalitat of Catalonia in the fields of Education, Sciences, Culture, and Communication and Information

This memorandum takes place in line with the memorandum signed on 3rd June 2013, to promote collaboration between the Parties in the fields of education, sciences, culture, communication and information, considering the autonomy of Catalonia within the Kingdom of Spain.

Memorandum of Understanding between UNESCO and the Generalitat of Catalonia

Framework Agreement between Sweden, represented by the Swedish International Development Cooperation Agency (Sida) and UNESCO on support to activities financed through voluntary contributions

This agreement is concluded on behalf of donating government ministries and other institutions, according to the UN General Assembly Resolution 72/279 of May 2018 introducing a one percent coordination levy on one-core contributions provided by Member-States in order to support UN development, accepted by Korea in a Memorandum of Understanding on the Framework of her Volontary Contribution, signed in 2015. Content 3 Annexes, including a template for mutually determined Funds-in-Trust Projects letter by the ROK Donors providing financial contributions to UNESCO.

2 original copies in English and Spanish

Instrument of Ratification - Agreement between UNESCO and the Government of the Republic of El Salvador, concerning the creation of a UNESCO Office in El Salvador

Contains original Instrument of ratification by El Salvador (31 March 2000) and transmittal letter (2 May 2000). Includes photocopy of original agreement for the creation of a UNESCO Office in San Salvador for the programme "Culture of peace" (see LEG-A-807).

Subfonds consists of chronological files from the Office of the Director of the IIEP from June 1972 until December 1988. They are arranged in chronological order.

The Archive Group is composed of the International Institute of Intellectual Co-operation (IICI) fonds. 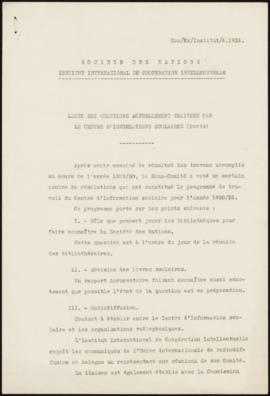 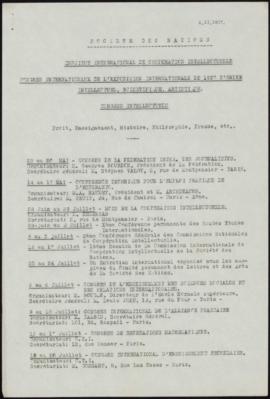 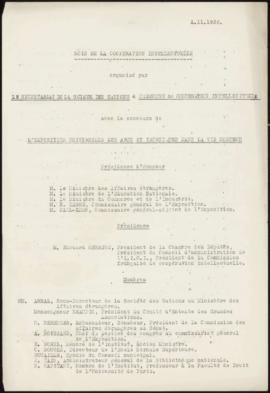 Report of the Director-General on the activities of the Organization in 1956, communicated to Member States and the Executive Board in accordance with Article VI.3(b) of the Constitution

Report of the Director-General on the activities of the Organization in 1957, communicated to Member States and the Executive Board in accordance with Article VI.3(b) of the Constitution

The photo and audiovisual archives consist of analogue and digital records dating from 1945 up until the present day.

A part of UNESCO's film and sound recordings, documenting UNESCO events and meetings since 1945, are kept in the UNESCO Phonothèque of the Sound and Telephone unit.

Subfonds consists of records and publications from the Office international des musées. It is arranged into twelve series, organized according to the original alpha-numeric classification system.

No information available about the content of these boxes

The photographic archives span the period from the foundation of UNESCO until 2000 and contain photographic material of UNESCO programmes, activities, and events (conferences, meetings, Director General visits). In addition, the photo archives consist of images used for exhibitions or publications of UNESCO (e.g. the UNESCO Human Rights Exhibition prints and negatives found in the series MC).

Series consists of fellowship files created by the Division of Training Abroad. It is arranged roughly in chronological order. Files contain applications to the programme and administrative correspondence. They are often very slight (3-5 documents), but can also have final reports and more substantive correspondence.

The film archives of UNESCO are divided into three parts:

All other film material is indexed in an electronic database, originally created and maintained by the Division of Public Information.

For questions regarding access to the film archives, or to request a search for film titles in the electronic database, please contact: archives@unesco.org 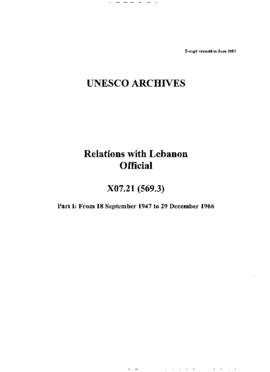 Relations with Lebanon - Official - Part I

UNESCO Relations with the Countries of the World 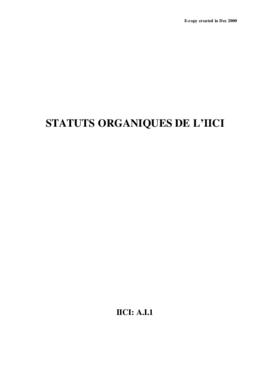 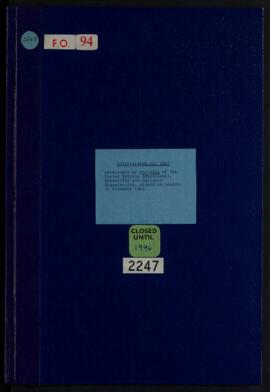 Portugal - Ratification of the UNESCO Constitution 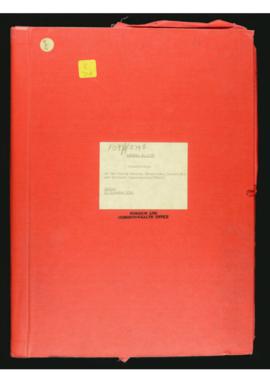 File consists of certified and uncertified copies of the UNESCO Constitution.