Implementation of the scheme files

Subfonds contains official and unofficial files, papers, letters, memoranda, manuscripts, maps, illustrations, photographs, etc. of the International Commission for a History of the Scientific and Cultural Development of Mankind as maintained by i...

Constitution of the United Nations Educational, Scientific and Cultural Organization

Subseries consists of copies and translations of the Constitution and its Final Act. It also contains original correspondence from the United Kingdom Foreign Office notifying UNESCO when a country has signed the Constitution or deposited its Inst...

Subseries consists of verbatim records, draft documents, telegrammes, letters and one recording of the private meetings of the General Conference during the vote for General-Director.

Agreement between UNESCO and the International Institute of Intellectual Co-operation

File contains signed original agreements and copies of letters exchanged between UNESCO and the United Nations. There is also the 'Livre d'or' or visitors book of the IIIC.

Office of the Director-General records

UNESCO. Office of the Director-General

Series consists of files on Non-Governmental Organizations (NGOs) with whom UNESCO maintains or maintained official relations. It reflects the process of admission to categories of official relations as well as the ongoing activities undertaken i...

Agreement between the United Nations and UNESCO

The collection consists of UNESCO records that were routed to and organized by a centralized Registry Section. The principal and system of classification used by the Registry was Universal Decimal Classification. The collection is further organiz...

Agreement between UNRRA and the Preparatory Commission of Unesco

Draft Agreement between the United Nations and UNESCO 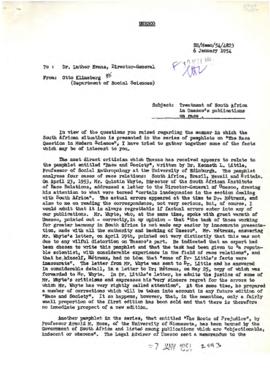 Relations with the Union of South Africa - Official

Note indicates that Instrument of Acceptance was deposited with the Government of the United Kingdom 5 September 1946.

The note also informs that twenty signatory Governments have now deposited their instruments of acceptance and thus the Constitution came into force on 4th November 1946.

Note from Foreign Office, London, regarding decrees by Venezuela and Belgium

Item indicates that Venezuelan Government in a note dated 12 November 1946 had informed the Foreign Office that a decree ratifying the Constitution had been issued and that the Instrument of Acceptance would be forwarded by air. Item also indicat...

Agreement between the United Nations and UNESCO

File contains one unsigned copy of the Protocol in English and French in one volume.

Agreement between UNESCO and the International Institute of Intellectual Co-operation

Correspondence on proposed Supplementary Agreement between the United Nations and UNESCO

The file contains letters and a memorandum exchanged between Director-General Torres Bodet and Acting Secretary-General Byron Price concerning the revision of the Agreement between the United Nations and UNESCO. 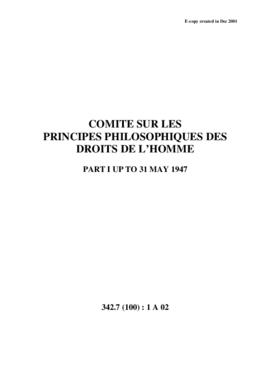 Relations with Countries of the World - Delegations - General - Part I

Originals of Presidents' reports to the UNESCO General Conferences 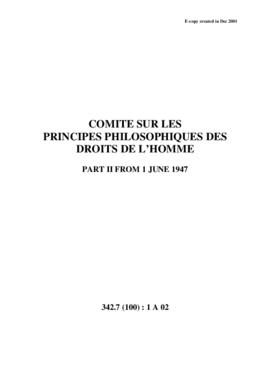 The series consists of legal instruments signed between UNESCO and non-governmental organizations, universities, foundations, private companies, or individuals. The series includes state universities and academies, but not research institutes wit...