Reference to US Congress' records on UNESCO

Copies of microfiche lists of records on US and UNESCO

Bibliography on UNESCO's activities in the field of space communication

Reference to articles and addresses by William G. Carr

144 references to articles and addresses by William G. Carr, the former Executive Secretary, National Education Association, who participated from 1944 to 1946 in the preparation of the Statutes of the United Nations and of UNESCO.

UNESCO Publications and important articles in periodicals about Asia

References to the files relating to UNESCO in the William Benton Papers. Benton has been instrumental in founding UNESCO during his State Department years, and he continued to monitor its growth. He served as United States ambassador to UNESCO fr...

List of studies and reports on communication satellite projects

Reference to US National Archives' records on UNESCO

Paper copies of microfiche and inventories, handwritten notes and correspondence about the records on UNESCO preserved by the US National Archive in Washington

NGOs and IOs established with assistance of UNESCO

Convention concerning the Protection of the World Cultural and Natural Heritage

Convention for the Safeguarding of the Intangible Cultural Heritage

Regional Convention on the Recognition of Studies, Diplomas and Degrees in Higher Education in Latin America and the Caribbean

File includes signed original copies of the Convention (A/409/A) as well as the Final Act (A/409/B).

UNESCO Institutes in Germany - Part I 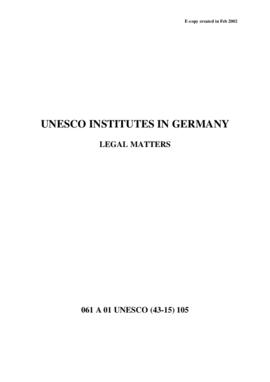 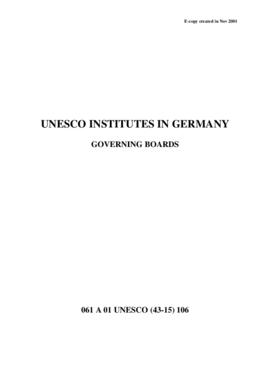 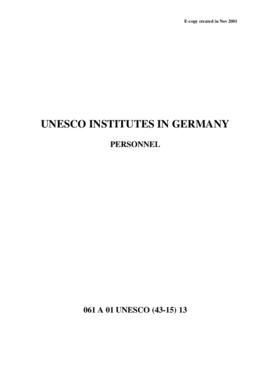 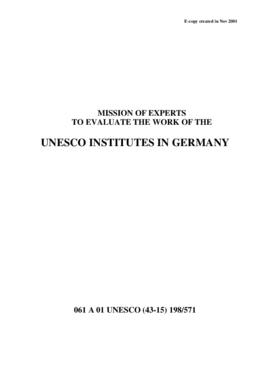 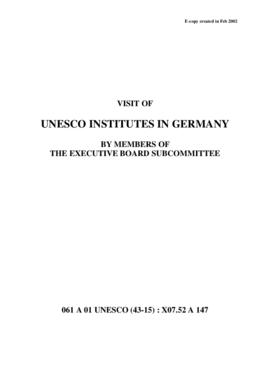 File contains an unsigned printed copy of the Agreement and a note of transmission from the UN Secretariat, 13-04-1954.

Agreement for Facilitating the International Circulation of visual and auditory materials of an Educational, Scientific and Cultural character

Agreement on Technical Assistance between UNESCO and the Government of Thailand

Supplementary Agreement number four to the basic agreement concerning the United Nations, the ILO, the FAO, UNESCO, the ICAO and the WHO and the Government of the United Kingdom of Libya

Basic Agreement on technical assistance between the United Nations Educational, Scientific and Cultural Organization and the Government of Peru

File consists of certified and uncertified copies of the UNESCO Constitution.

Draft Agreement between the United Nations and UNESCO

File contains original Full Powers instruments signed by President Tubman, Liberia, for two representatives at the of Conference of Ministers of Education of African Member States held in Addis Ababa, Ethiopia in May 1961.

Convention on the Means of Prohibiting and Preventing the Illicit Import, Export and Transfer of Ownership of Cultural Property adopted by the General Conference at its Sixteenth Session, Paris, 14 November 1970

Plan of Operation for the Faculty of Engineering of the University College of the West Indies (REG.26)

Survey of Ground Water Resources in the Northern Sahara (REG.100)

Plan of Operation for the Polytechnic Institute Special Fund project

Convention on the Protection of the Underwater Cultural Heritage (UNESCO - Paris, 2 November 2001)

Instrument of accession. Inscribed in the Fifth Book of Protocol under No.3601.

Copy of unsigned agreement with an internal memorandum.

Agreement between UNESCO and The Organization of the Islamic Conference

Aide Memoire between Mongolia and UNESCO

The file contains two printed copies of the Convention signed in Tokyo on 26 November 2011. The copies are printed with an introductory explanatory remarks which explain the history and context of the 2012 Convention.

Instrument of accession as well as transmission letter, 23 March 1978.

Recommendation for the Protection of Movable Cultural Property

File consists of two original signed copies of the Recommendation for the Protection of Movable Cultural Property as adopted by the 20th Session of the General Conference at Paris, 28 November 1978.

Agreement between UNESCO and the Government of the State of Qatar