Agreement between UNESCO and the Government of the Republic of Angola

File contains both Portuguese and English versions of the collaboration agreement, as well as a memorandum from DIR/AFR/CEP regarding their transfer to the Archives. 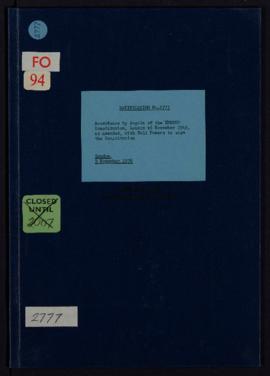 Angola- Ratification of the UNESCO Constitution

The Communiqué was produced as part of an Official Visit of the Director General to Angola 4-5 April 2012. The file includes both a French and Portuguese signed original. The file also contains the original transfer memorandum from DIR/AFR/CEP to the Archives for both this communiqué and the joint communiqué with Chad A/1073.

Funds-in-Trust Project financed by Italy in Angola: "Promoting educational opportunities for the rehabilitation of vulnerable children"

UNESCO/Government of the Republic of Angola - National Programme of Doctoral Training in Science, Technology and Innovation (NPDT-STI)